Leader Of The People

JYOTI BASU (b. 1914). Born in India, Jyoti Basu is known primarily for his many-si

ded elaboration in practice of a combination of Communist parliamentary and extraparliamentary political tactics aimed at establishing a seemingly indestructible Communist control over some of the levers of the state-level political power in West Bengal (India). A pioneer in such politics in India since 1945, and still its most successful exemplar in 1984, Basu was elevated to the Central Committee of the Communist Party of India (CPI) for the first time in June 1950, resigned in december 1950, but rejoined in April 1951. He has been a member of Central Committee and Politburo of the Communist Party of India (Marxist) (CPI[M]) since its foundation in 1964.

Initially distrustful of parliamentary politics as the politics of the “bourgeois talking-shops,” Basu contested and barely won his first parliamentary election to the Bengal Legislative Assembly of colonial India. His intent was to extend and legitimize Communist control over a trade union in a reserved constituency of railway workers. He ran again in the first elections in the Indian subcontinent after independence in 1951. This time, too, his involvement in bourgeois parliamentary politics was primarily due to some “other” interests, i.e., reorganizing the Communist Party in West Bengal, which had been weakened organizationally by bitter internecine conflict in 1948-49 but had extended its mass political influence ( which was fully capitalized in the Communist electoral successes in the 1951 elections).

But by now he was a firm believer in Lenin's* recommendation that Communists must contest bourgeois elections to serve as tribunes of the people in order to expose parliamentary “cretinism” from within, so as to prepare the masses for participation in revolutionary antiparliamentary politics. Since then, more fully than any other Indian Communist, Basu has explored the scope as well as the limits of such a combination of Communist parliamentary with extraparliamentary political tactics. But because of grim and unanticipated political events involving clashes of almost equal severity with Congress “enemies”, left party “allies,” as well as explosive “Naxalite” Communist dissent originating within a newly formed CPI(M) in the 1960s and 1970s, these tactics have produced a bizzare outcome. 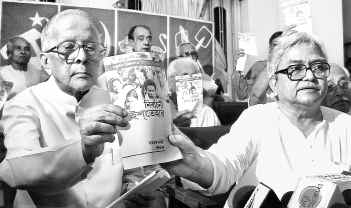 Over the years, the more effectively the West Bengali Communists exposed the parliamentary system from within and from without, the more decisively did the West Bengali highly politicized voter vote for them. But there was no matching advance of the Communist parliamentary and/or extraparliamentary presence in the rest of India, where (except in Tripura and perhaps in Kerala) there was a recession of whatever Communist political influence had existed. The result was that by 1983 the West Bengali Communists were the encircled but semipermanent political managers of a capitalist economy in West Bengal, which was a less developing fraction of an unevenly developing but dependent Indian capitalist economy. 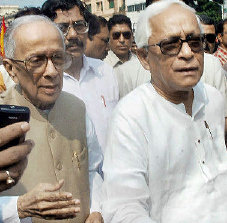 There are several causes of West Bengal's low rate of capitalist development. First, there is the extensive damage caused by the policies of successive central governments of the all-India bourgeoisie, which have led to a drain of reinvestible resources from West Bengal. This drain has been caused by its tax measures and also by statutory all-India price differentials, which have deprived West Bengal of its comparitive advantage in coal and engineering products. On the other hand, denial to West Bengal of its due share of foreign aid received by the centarl government, and deficit spending by it, has weakened West Bengal's government's fiscal powers.Second, multinational and Indian monopoly concerns have shown, apparently on grounds of political realism, only minimal interest in investment in West Bengal, despite public overtures by Basu (acting on behalf of West Bengal ministry as well as the central leadership of the CPI(M).

These overtures have been made to them on the basis of the doctrine that until capitalist monopolies are eliminated every where in India, West Bengal under under Communist control will compete with the bourgeois governments of other Indian states to attract them. Third, the CPI(M)'s “democratic” rich peasant bourgeois “allies” in West Bengal probably habitually reinvest less out of their profits as compared to the “democratic” rich peasant bourgeoisies of other Indian states.
Fourth, repeated though somewhat half-hearted appeals have been made by Basu and others to the civil employees of the West Bengal government to step up production as a token of political support for their own government to set up producation as a token of political support for their own government. But they have not agreed to do so – not even the workers and employees belonging to the CPI(M) or the trade unions led by it.