“In spite of constitutional limitations, what we could, why other state governments couldn’t?” -JYOTI BASU 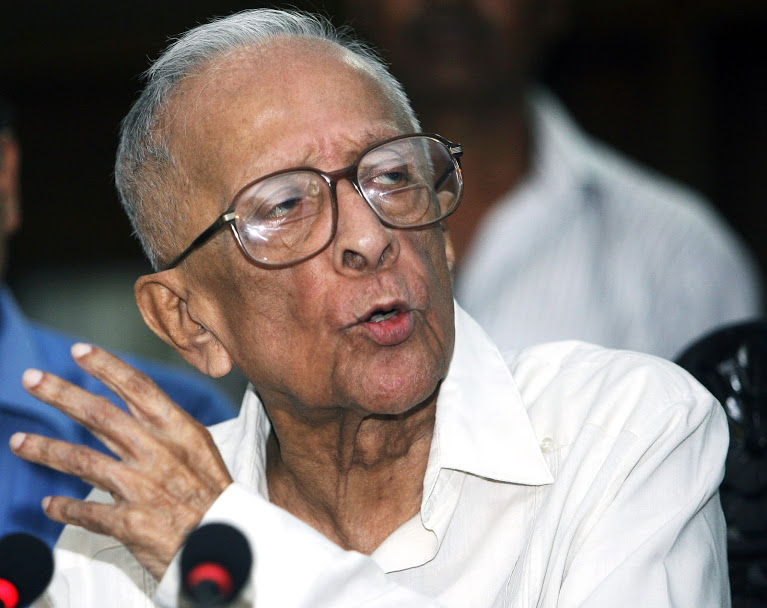 Wednesday, June 25, 2008:JYOTI BASU ON 30TH ANNIVERSARY OF LEFT FRONT GOVT.
“With the installation of the LF front government in West Bengal on 21st June, 1977, a new era had started in Indian politics and in the life of the Indian people. We knew that under such social structure and constitutional limitations we cannot change every thing, we promised to give minimum relief for common man, after 30 years, I think what we have done for people is more than minimum relief, in defence of the interest of people, we implemented the alternative approach of development” Veteran Communist leader and CPI (M) Polit Bureau member Jyoti Basu has stated.

On the eve of 30th anniversary of Left Front government in West Bengal, 93 year old veteran communist leader JYOTI BASU in an exclusive interview with Prajashakti representative expressed his views and experiences, enlightened on the struggle behind the installation of LF government and its tremendous achievement during last three decades. At the same time Basu also has asserted that “within such constitutional limitation if we (Left Front in Bengal, Tripura, and Kerala) could implement various pro-people policies, why other states failed to implement such policies?”

Comrade Jyoti Basu will turn 94 on July 8, as longest serving Chief Minister and veteran communist leader Jyoti Basu stated, “I am extremely happy that LF completed 30 years in office, the people of a state gave a massive mandate in favour of a coalition led by the Marxists to run a government. The mandate was renewed again and again”.

Q. Left Front government led by CPI (M) has completed its 30 years journey in a bourgeois-democratic stratum - which is unparalleled and historic - how could this be achieved?

Actually there was a time when we thought that no LF government would survive; it is equally true that we never imagined we will continue for 30 years although the real power in parliamentary democracy rests with the Centre and with the bourgeois-landlord parties. In 1957, the First United Democratic Front Government was formed in Kerala under Comrade E M S Namboodiripad was Chief Minister. We highlight this experience in our state. In 1960s and 1970s, massive struggles were waged under the leadership of CPI(M).

The movement for food, the student movement the refugee movement, the workers’ movement and the teacher’s movement followed one after another which created massive political mobilisation which was instrumental in installing United Front Government in the year 1967, though the government survived for nine months. And the second U.F Government lasted for thirteen months which came into power in 1969.

Even at that time people of Bengal observed the role of our party, in spite being the largest party in the alliance, we left the CMs post for Bangla Congress. As we all know what happened in 1971, in the name of election, the Congress resorted to malpractice, it was a complete mockery of parliamentary democracy. Congress won that election by rigging, we decided to boycott assembly session as mark of protest. After that that struggle for democratic rights and freedom of civilians took an unforgettable height at in West Bengal. Freedom of expression of common citizens was snatched after the imposition of emergency on June 26, 1975.

In fact, such situation prevailed continuously since the fall of the second United Front government. The older generation has seen us in the opposition; they have also seen the amount of repression we had to suffer. Our party was declared illegal after independence in 1948. Most of our leaders were jailed. After high court gave us legal status we participated in the first poll in 1952.

People have witnessed the brutality with which the bourgeois party’s unleashed terror on our party members and workers but even under such repression we never surrendered before our class enemy, never compromised with the ruling class. This is our legacy. And it is this continuous struggle for people in the face of all adversity have earned us the respect and immense faith. Even after 30-years people still vote for us in every election. Slanderous campaigns were launched against us to dislodge us from power through unconstitutional means and even Election Commission joined in by holding elections in five phases but people of the State gave a fitting reply by sending back LF to power with three-fourth majority.

Q. After the installation of LF government so many pro-people programs have been implemented during this period, what were the main priority sectors and major achievements?

Only after we came to office, we gave serious concentration to implement our commitments which were mentioned in our 36-point charter of programs. After we won election in 1977, I told the people, gathered to greet us at Writers’ Building that we would not rule from Writers Building alone but also with the workers, employees, and officers and along with all section of people. We gave emphasise over Land reform programs, as I know more than 13 lakh acre land were distributed among poor and land less people. In our state about 83 percent of the agricultural land is in the possession of the poor and marginalized farmers.

This program is still continuing, even this Seventh LF government distributed land to poor people, though some problem relating to court cases still remain. We also gave emphasis to agricultural development, decentralization of power through the three tier panchayat system, municipalities, ensuring women reservation in panchayat system. Voting right for all above 18 years, in municipality and panchayat. Agricultural production has increased.

We also give much priority on micro and small-scale industry. Interests of poor people, agricultural labour, share-croppers are very much protected. Through series of mass movement and struggles, Left Front came to office. The Left Front is not any electoral front - people saw our role. In parliamentary democracy we have created history. I heartedly believe that whatever we committed at the time of installation of LF government we have almost fulfilled about 90 percent program. Though still now there is no denying that there are some draw backs.

We have committed electrification for every village but it was not completed, though I informed that within 2012 it will be done, 7th Left Front Government has decided it. Actually we never hide anything before people, even our negative points. We ask our party comrades to listen to the criticism against us and if there is anything positive that can be done, then it has to be done, if not then the people should be told so directly - it is our tasks. Though in many cases Central government is responsible, they have created barriers over our developmental program and hampered our image.

Q. You have mentioned Bengal have faced discrimination, Please elaborate this issue?

You see from the beginning we have faced various conspiracies and discrimination. I still remember two or three incidents very well. There was an electronic project in Salt Lake area that Indira Gandhi has promised to help us with, after keeping me waiting for one year she said that her officers who had set up a committee to look in to this matter, unanimously suggested her not to go with this project - no investment should be made in West Bengal, because it is a border state, ridiculous!

I asked them what is the problem, if it is a security related problem then it will be more serious in North-Eastern states, but she told, ‘I cannot do anything, our Officers are not ready to give you permission! But later without any help of Central government we build up this electronic complex on 300 acres land, now about 25-30 thousands youth work there. The other case is of Haldia Petrochemicals Complex, a project worth over Rs.5, 000 crores, but I had to wait for 11 years to get permission from the Central government, though now more than 70,000 people are employed in the downstream industries.

Q. how do you see the opposition’s role in the developmental program of Bengal?

Several times I told that in parliamentary democracy role of opposition is very important whether big or small. But it should be a responsible opposition. Oppositions parties have the right to oppose Government program but in a responsible manner, when we take pro-people program there is no reason why they will not extend a co-operative hand.

Bengal is now largest producer of rice and second largest producer of potato in country. Through land reform program we distributed lands to poor people. This program is still continuing. Now for the interest of unemployed youth, Government is emphasizing on industrialisation. It is the necessity for our state. There was a time when WB held a prestigious position among other states in country. But due to politically motivated licensing system and policy of freight equalization by the successive Congress governments, the state had to suffer a lot and acute industrial stagnation was developed.

But after removal of these regulations, discrimination, I delivered one speech over our industrial policy in assembly, though congress legislator also marked their opposition against this policy. Some confusion was created after placing this report, actually here I mentioned that for the industrial growth we also needed foriegn investment, but it should be based on mutual interest protecting the legitimate interest of our workers.

However, the opposition created chaos over LF government’s every developmental programme. Even when I was the Chief Minister, we appealed to the opposition to be a part of the all-party delegation to meet Prime Minster Rajiv Gandhi, they never did, Mamata Banerjee and Ajit Panja refused to be a part of the delegation. Mamata told ‘we can’t go with you before Rajib Gandhi”.

When our Government was bringing developmental projects for our state they created problem. Even, few months ago TMC legislator ransacked assembly house, destroyed many costly furniture, government assets. Is this a responsible attitude, I was informed that Assembly Speaker decided to stop their salary, though now, they have been resumed.

What I am trying to say is that earlier opposition party played responsible, constructive role, people of Bengal have seen our role as a responsible opposition. We never created problem over developmental program for our state or the interest of people- even when Congress CM Bidhan Roy took initiative for Durgapore steel plant, Kalyani township we support those projects.

Q. So, on coming 21st June LF government will complete its 30 year long journey - as Veteran leader of country’s communist movement what are your feelings?

I am extremely happy, our government now reached in its 31 year. It is a historic moment before parliamentary democracy. Actually during these long periods what we implemented in West Bengal, Tripura and Kerala, has to be campaigned countrywide. People across the country have to know what type of alternative programs we implemented in these state. Within such constitutional limitations and social structure what we have done, why other state couldn’t do this? This question has to be raised.

Though we are very strong in three states along with some of the other state but our party is not strong in many states. Not only the party organisation, but we have to strengthen our mass organization as well. Without strengthening mass organisation’s, we cannot build up a strong party all over the country.

I believe that under such bourgeois structure, we should take whatever little advantage from that system. Our aim is to build a class-less, non-exploiting society, for which we have to continue our fight. Though I don’t know how long it will take time.