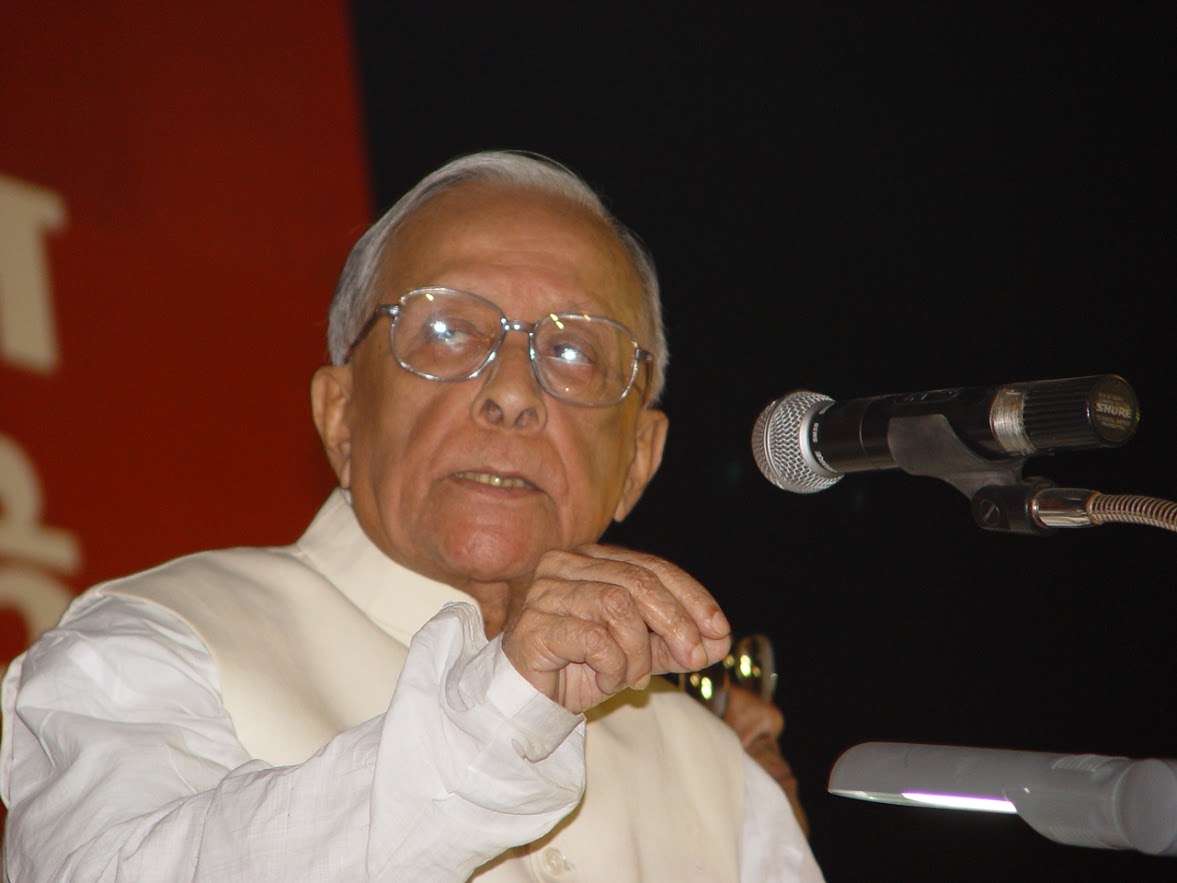 Bengal Panchayet is model before country. Conspiracies being hatched against us, but I confident people never voted for any opportunist combine, we will again win: JYOTI BASU

Kolkata:
‘The three tier panchayet system in Bengal became a model for all states’. Just five days ago of panchayet poll in an exclusive talk with Sudipta Basu, Kolkata Correspondent of Prajashakti, Veteran Communist leader Jyoti Basu in such way has expressed his view. Basu also has pointed out the importance of this upcoming panchayet election told that “now all extremist right and extremist left forces merged together against us.

They have no any programs, political ethics, and morality. I have confidence upon people of Bengal that they will never vote to this opportunist combine. For another time Left Front will win in this election. It is so needed before country’s left democratic and progressive movement.

Mentionable that on 11th, 14th and 18th may, the 7th three tier panchayet election will be staged in rural Bengal in 17 districts. Already poll campaign is in full swing. The attacks on CPI (M) activists are also getting momentum. On this situation Left Patriarch Jyoti Basu has shared his experiences and views with Prajashakti reporter today morning at his residence Indira Bhaban, saltlake.

Here Basu has clearly stated it is fact that, before 1978, during congress regime now programs or projects were implemented by panchayet. It was paralyzed system in that time. Even panchayet election was rare. But after installation of Left front Government in 1997, we held first panchayet election in 78. Till now, panchayet elections staged by five year regular interval.

This is also a history. Panchayet system is now turned as local government. Soon after coming to office, The Left Front Government reorganized the institutions of local government into a three-tier system of democratically elected bodies. This comprised Gram panchayets at the local level, panchayet samities at the block level, and Zilla parishads at the district level. Even 5o percent of budget allotted through panchayet and municipal bodies. That’s why I always told that our panchayet system is model before rest states in country.

But unfortunately due to lack of political will this system had not been taken up in all states properly, including some congress rullled state till now. Even few days ago I also heard that his wife Sonia Gandhi passed some statement against us, but she didn’t know about West Bengal’s condition loudly.

People have witnessed the brutality with which the bourgeois party’s unleashed terror on our party members and workers during 0-70’s but even under such repression we never surrendered before our class enemy, never compromised with the ruling class. Basu continued. ‘This is our legacy. And it is this continuous struggle for people in the face of all adversity have earned us the respect and immense faith. Even after 30-years people still vote for us in every election.

Slanderous campaigns were launched against us to dislodge us from power through unconstitutional means. After series of struggle when we came in office in 77, I told that ‘we would not rule from Writers Building alone but also with the workers, employees, and officers and along with all section of people. Though Panchayet act was prevailed during congress regime, but it never implemented in reality. We have taken initiative to adopt when 73rd and 74th constitutional amendments.

Basu has also asserted that, for the first time we introduce seat reservation in panchayet for Sechedule cast, Schedule tribe and for women to ensuring the participation of weaker section of society. Voting rights for 18 years also then enacted. Though unfortunately then congress went court against this decision. Congress leader Ajit panja, now he in TMC, then also filed suit against us in court. Though it was rejected.

So, now this generation should have to know what the role of Congress was, I don’t understand why still they seeking votes before people of west Bengal. And now Congress also divided, TMC formed and they also are very indisplcnied.they have no any political program, outlooks, honesty. Still now no one knows their principle. And these extreme rightist parties now merged with extreme lefts, even self claimed left party SUCI also shared their hands with them. It is total an opportunist combine. People of Bengal have huge experience. I believe that they never voted in favour of such opportunist combine in this panchayet election.

Jyoti Basu also expressed his happiness, told that ‘at first we have doubt that though we introduce seat reservation for women, is it possible to find women every where for contesting? But now I saw not women members are really doing very good job in panchayet, many women are became panchayet pradhan, Jilla Sabhdipati. And their performance is very good. I just heard that now total 7 lakh 50 thousand SHGs are working across the state where more than 70 lkah women are involved. Most of them are working in rural Bengal, in panchayet area. This is very good development. Empowerment of women is required for our long program.

Basu also has told, panchayet election is in door. We have distributed lands to poor people. We gave emphasize over Land reform programs, as I know more than 13 lakh acre land were distributed among poor and land less people. In our state about 83 percent of the agricultural land is in the possession of the poor and marginalized farmers.

Though in that time Congress opposed this move. This program is still continuing, even this Seventh LF government distributed land to poor people, though some problem relating to court cases still remain. We have marked huge achievement in agriculture. Production of all types of food grains has been increased in many folds. West Bengal is in the 1st position of the list of rate of increase of production of agricultural produce. However now our Government is moving towards industrialization on basis of this success. Thousands of unemployed will be benefited by this. We are in first in agriculture, now e want to be first also in industry.

Other hand Basu has strongly criticized oppositions role saying that, Several times I told that in parliamentary democracy role of opposition is very important whether big or small. But it should be a responsible opposition. Oppositions parties have the right to oppose Government program but in a responsible manner, when we take pro-people program there is no reason why they will not extend a co-operative hand. Now I heard that all of them are merged.

Even some armed criminals (Maoists) also merged with them and killed every day our party cadres. It is not fair. Deep conspiracies hatched against us to weak us. Even I just heard from our party leaders, that again they all together created chaos in Nandigram. Just one day ago they also killed our one party comrade in purulia. But I told our leadership that, in Nandigram now we have to maintain our patience, we have to keep more alert. Out first task is to ensure proper atmosphere to inspire people for peaceful and fair election. Though I have information that opposition are very much active to disturb gain in Nandigram.

On that other hand Basu also expressed concern, saying that ‘it is unfortunate that still some problems remain in Left front. In some places other LF constituents fight against our candidate. Though in last time panchayet election RSP, AIFB also contested against us in some seats. But this time this trend is less. In this political situation I again appeal to all of LF constituents to fight unitedly against our enemy’s. Because it is need to strengthen Left movement in country now.

After concluding this discussion, Basu also has made appeal, “this panchayet election is very much important, we must keep alter, conspiracies born every day against us. But I believe that People through their long experiences will take proper stand. They never supported any opportunist force. Left Front will make good result again in this panchayet election. Let see what happen. But I always believe that it is man and man alone who creates history. Despite many crest and thrust people will finally emerge victorious and go in freedom in a classless society free from exploitation of any form.